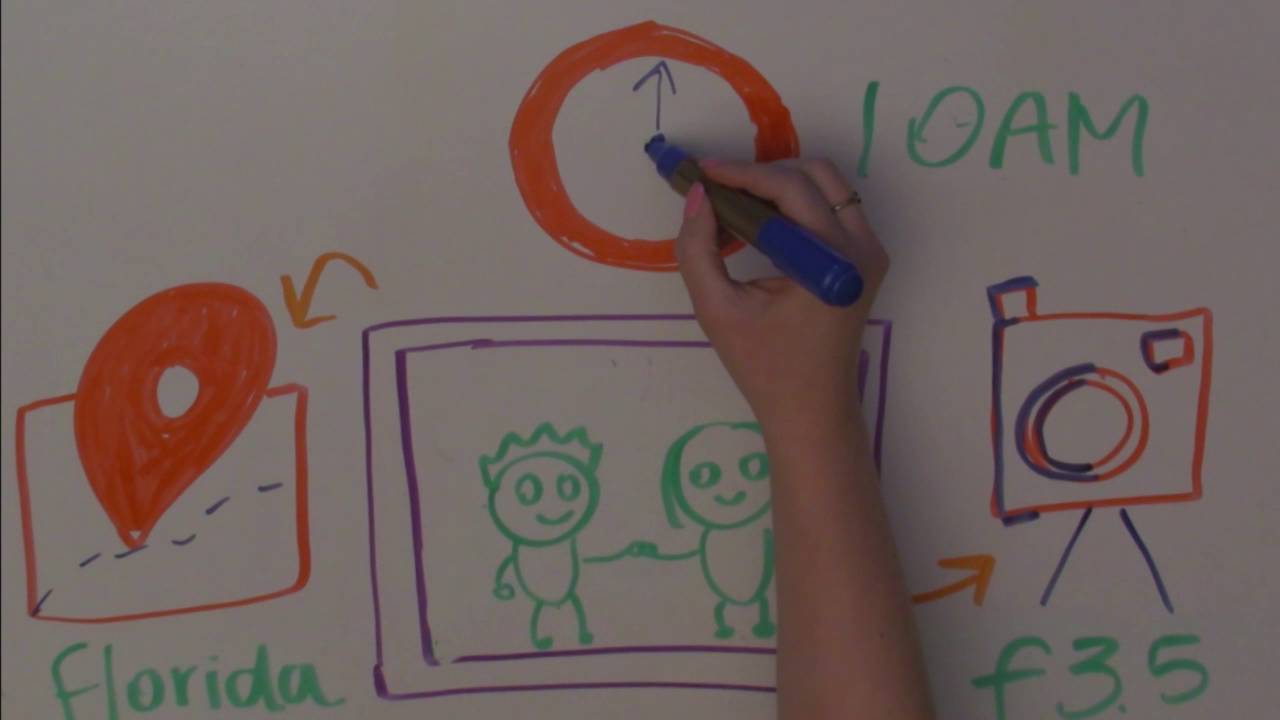 The idea of the 5 Minute Metadata video series came to be because Sam and I were trying to figure out how we could promote Aristotle and also educate people about metadata. We thought it would be a cool idea to incorporate short videos to achieve this, because when searching for videos about metadata on YouTube, there weren’t any that were easily accessible for people new to the subject.

We decided that I would film a “draw my life”-esque video, the idea being that it would be a friendly way to discuss metadata. I liked the idea of the “draw my life” videos because it keeps your attention and is sort of personal. It would be a good way of talking about metadata, in a short and to-the-point way while also being something that people could relate to. I would draw and narrate the videos, and Sam would help with content, it is definitely a collaborative work. We bought a whiteboard and some heavy duty lighting and then got started.

The first challenge was figuring out what to talk about first, and the most logical conclusion was to introduce metadata and the differences between two different types of metadata, structural and descriptive. We wrote out a storyboard and then a script and then started with filming. Getting the camera at a good angle was the most difficult part of the process, it seemed that at every angle we placed it at there would be a glare on the whiteboard. We finally figured out a way to eliminate the glare and then started the filming process. It took a few hours to get footage, some of it turning out unfocused and in some parts my hand would accidently erase some key material and I would have to start the segment again. But, finally, we gathered all of the footage we needed, I uploaded it to the computer and started editing it all together. I think one of the hardest things about making a video is post-production, editing in particular because it takes a long time. I went through all of the short segments that I filmed, picked the best edits and then cut different segments together. After a few days of editing the video, I was satisfied with the result. During editing, we would often quoting Confucius - “Don’t let the perfect be the enemy of the good,” as I could have kept editing the video because I am a perfectionist, but what we had in the end was good content to put online.

So far, the video has been viewed a few hundred times and in all parts of the world. I am very grateful that people are watching it, we are achieving our goal which was to help educate people about metadata. By making these videos we are promoting our product, Aristotle Metadata Registry, and also helping people understand metadata in a way that hasn’t been done before. We want people to think of Aristotle Metadata Registry and then automatically associate it with these videos that could have helped them understand metadata more. Thank you for watching, and there are more videos in the works and don’t forget to comment below if there are any topics you want to see us cover.

On March 4th, 2021, Aristotle Cloud Services clients and key invited technical experts met online to participate in the 2021 Aristotle Roadmap Committee meeting. The goal of this meeting was for our clients to work with us to prioritise feature development for the upcoming year. By openly working with our...

Introducing Aristotle 2.0 and other new features

May is here, and the team has been working hard and delivering new features from our published 2018 roadmap, including Aristotle 2.0. What is Aristotle 2.0? In Quarter 1 “Aristotle 2.0”, we focused on improving the underlying infrastructure of the software, to use new or better versions of libraries, huge...

In the media: Canberra start-up making meaning from data

Canberra Business News recently wrote about Aristotle Metadata for their series on Entrepenurs. Check out a preview below or read the full version online. Aristotle Metadata started out as a software project a number of years ago. At the time, founder Sam Spencer had been working on metadata modelling and...